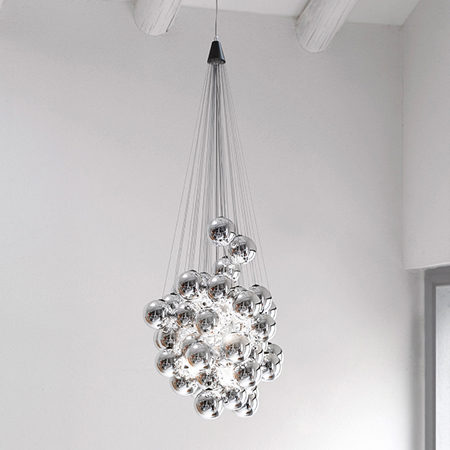 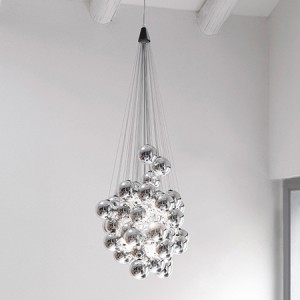 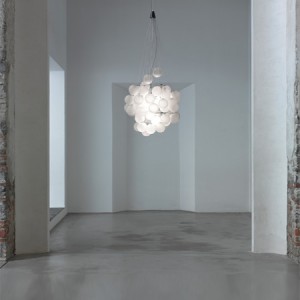 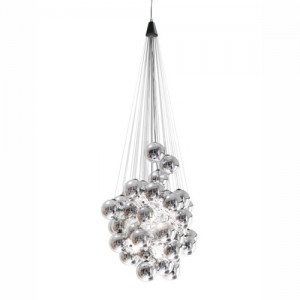 “Traditional chandeliers are usually designed with rigid symmetrical repetition of a single piece, such as a crystal prism. Stochastic also repeats the same object, but in an apparently random way, generating a special complexity. The LED source is positioned at the center of the cloud to create a contrast with the very light glass spheres. With the light source concealed, the light itself, reflected and refracted, becomes the true protagonist of the composition. As in the installation Layers (Paris – 2012), the individual objects become a single thing thanks to the complex play of lights at the center.” Daniel Rybakken

A suspension lamp with an evocative character, which thanks to the dematerialization of the support elements and the volumetric breakdown takes on a theatrical, poetic character: not just functional quality, but also aesthetic and decorative refinement.
Composed of glass spheres at different heights, the lamp permits infinite combinations, in a sort of “controlled freedom”: each sphere is connected to steel rods of different lengths, which are attached to the ceiling in a creative way, giving rise to always different light clusters.

Hence the name Stochastic, indicating a random process, in reference to the different possibilities for combining the spheres in unexpected ways, each time leading to a different lamp, a one-of-a-kind creation. A game of imagination whose light source – a double high-efficiency LED module – is enclosed within the spheres, generating warm, diffused indirect lighting, aimed both upward and downward.